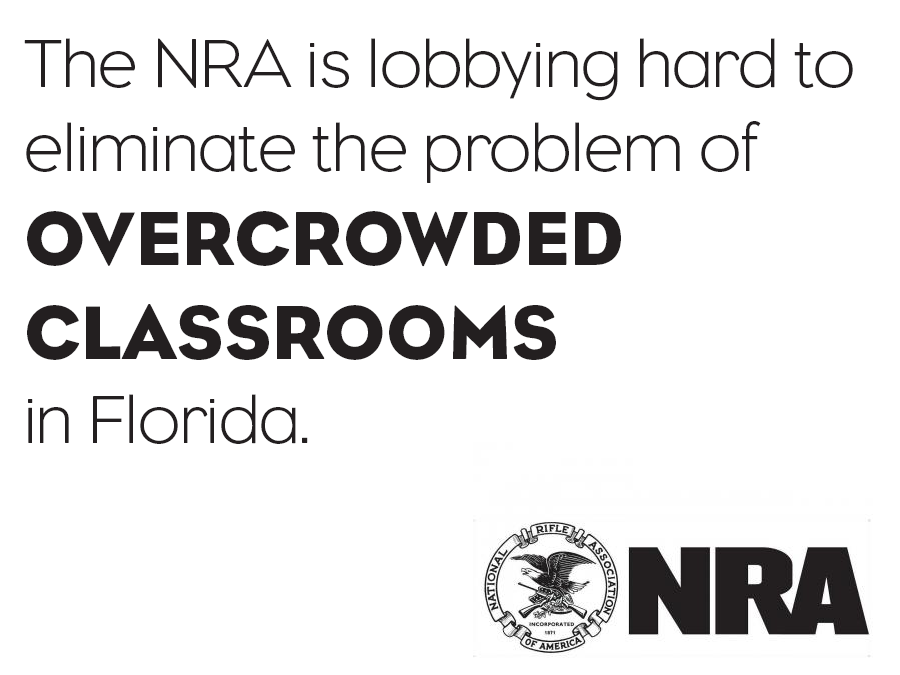 The NRA is lobbying hard to eliminate the problem of overcrowded classrooms in Florida. More dead kids = less crowded classrooms. Don’t let the liberal media trick you into believing that the NRA doesn’t care about kids and schools. We care more about our profits than we do about the lives of your children, but we still do care about them. Please continue sending us money under the vague threat of the boogeyman taking all your guns away. Murica. Fuck yeah.

Before you gun nuts get triggered, you should know that WTFF is pro-gun, but also anti-stupid.

The NRA started out as a relatively good thing, but over time they have become politicized and corrupt. We should be able to keep our guns, even the big, scary ones that some lawmakers voted to ban while under pressure. We should have extensive background checks that prevent obviously deranged people from having guns. We should require people to learn about guns and take shooting lessons before they own one, just as we do with cars. Pretty much everyone can get on board with this thinking. It’s just obvious. If we all meet somewhere in the middle, we will all be better off. Please discuss in the comments.

Being anti-NRA is not being anti-gun. The NRA is a corporation, not an idea. They don’t really care about your gun rights, all they care about is money and power.

All the stupid arguments are getting old. People are seeing through the bullshit and old quotes like, “guns don’t kill people, people kill people.”

Yes, people kill people, and guns make it a helluva lot easier for cowards to kill. We should have laws in place to keep obvious psychopaths away from weapons.

It’s also worth mentioning that no legislation or movement could ever stop human beings in their current evolution from killing each other, unless we systematically eliminated every single human being from this planet. Some people just like to kill. We can’t fix that until we fix the sources of all suffering: greed, hatred, and delusion. That’s still no excuse to do nothing. We’re smarter than that, let’s prove it. Take a stand for sensible gun policies.

Note on the satirical use of the NRA logo: The fair use of copyrighted works for purposes such as criticism or comment is not an infringement of copyright. See 17 U.S.C. § 107. Also SLAPP laws protect the right in Florida to exercise the rights of free speech in connection with public issues.