Tallahassee (WTFF) A bill proposed by two lawmakers would allow convicted felons to petition the court to restore their voting and gun ownership rights.

HB 903: Restoration of Rights was filed on Dec. 6 and if it passes, would become effective in July 2018. Its two main sponsors are State Reps. Kim Daniels, D-Jacksonville, and Cord Byrd, R-Neptune Beach.

“What I’ve been focusing on is people who need a second chance getting that second chance, and I think it’s a good thing that people who have paid the price, who can prove that their life is changed by going before a judge, and that’s the difference,” Daniels said.

It’s not a free pass for all felons. Each individual case would have to be decided by a judge. There would be a hearing and the state attorney’s office could challenge anyone’s request. Murderers, for example, probably won’t have their rights restored according to an interview by Action News Jax:

“If they wanted to apply, they could certainly apply,” Cord Byrd said. “I can’t imagine that there’s a judge in the state of Florida that would grant rights or restore rights to someone that was a violent felon or a former murderer.”

No sex offenders may petition to have their rights restored (see lines 39-41 of the bill).

The proposed law also mandates that the petitioner “has led a law-abiding life since discharge or release and appears likely to continue to do so,” which weeds out anyone who still acts like an idiot after being released.

Obviously this bill will still be very controversial, despite all the built-in safety measures.

HB 903 is  only 4 pages long, so you should read it for yourself in its entirety before you decide. Never trust any single news source, ever. We’re all biased. We all make mistakes.

Reestablishing voter rights for convicted felons is one thing, and allowing them to own a gun is another. We aren’t sure why these lawmakers chose to cram both of these things into one bill, as they are drastically different arguments.

The last time Florida changed their gun laws, murders went up 22% (reuters.com) and the rate of homicides involving firearms increased by 32% (economist.com). 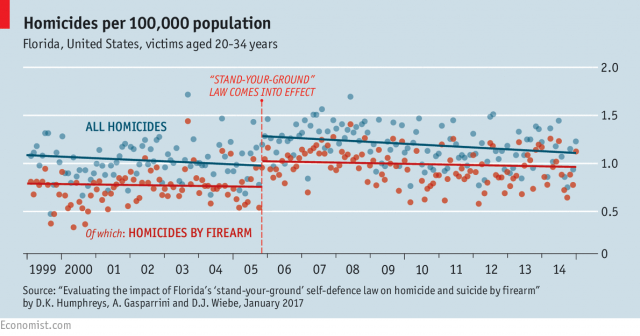 Those statistics really don’t help public sentiment towards this proposed bill. In normal jobs, these decision makers who implemented the “Stand Your Ground” laws (Jeb Bush and the gang) would all be fired and then sued for f*cking up so bad, but this is politics… there’s nothing normal here. The decision makers get paid by gun manufacturers via campaign contributions, but it’s us Floridians down here in the swamp who pay the real price and end up with the gaping holes in our heads as a result.

So our state made lots of bad decisions. As many states have.

Let’s not go down the slippery slope and assume that giving citizens back their 2nd Amendment rights would make things worse or increase violence. There’s no hard evidence to prove that. Everything people spew is just emotional nonsense, from both sides. Yes, “guns don’t kill people, people do,” and yes “guns do kill people.” There’s truth and ignorance in both statements. With this bill though, each individual will have to petition the court and go through a thorough approval process (again, read the darn bill, it’s 4 pages long).

Many people respond to the word “felon” like it’s the Bubonic Plague.

It’s not fair to automatically dismiss the notion of restoring their gun rights. The situation is complex. There’s no real way to know who the “good guy” with a gun is, and who the “bad guy” is. That’s called prejudice, and it’s not a good thing. We can though, allow judges to make intelligent decisions based on their past behavior and current attitude. Our goals should be to integrate prisoners back into society, and allow them to live normal lives after they’ve paid their price according to law. Instead we seem to wish to break them down in prison but never lift them back up. People change. People find religion. People find peace.

There are many “bad people” with guns who simply haven’t been caught yet, just as there are “good people” who have already served their time and deserve their 2nd Amendment rights restored. There’s really no definitive argument on either side, because humans are complex and always changing. But that doesn’t mean we should give up.

Also, anyone who wants a gun will get a gun. Another pro to this bill is the fact that legally owned guns must be registered, so at least we know who the guns belong to if they are used in a crime or found tossed in a ditch somewhere. Prohibition never works.