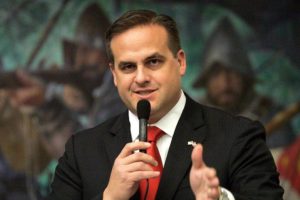 TALLAHASSEE, Fla. (AP) — A Florida state senator who used a racial slur and vulgar language in a conversation with two African-American colleagues resigned Friday, saying the incident is causing a distraction to the legislative process.

“I clearly made comments that were hurtful, unacceptable and inappropriate. The American people and Floridians want their leaders to be accountable and responsible, and by resigning my elected office I believe I am demonstrating those qualities they desire and deserve,” Artiles said in the statement released by a publicist.

Negron said the resignation was the right thing to do, and he dropped an investigation into the incident.

The Florida Legislative Black Caucus filed a complaint about the incident on Wednesday and asked that Artiles be removed from office.

The matter began Monday night during a private conversation with Sens. Audrey Gibson and Perry Thurston at the Governors Club, a members-only establishment near the Capitol. Artiles used vulgarities in talking with Gibson, including one particularly offensive to women. Sen. Perry Thurston intervened and Artiles, a Cuban-American from the Miami area, used a variation of the “n-word” and used a vulgarity to describe Negron, according to the complaint filed Wednesday by Thurston.

Artiles apologized for the comments on the Senate floor on Wednesday, but Democrats said that wasn’t enough.

Democratic Senate Leader Oscar Braynon, who is African-American, issued a statement saying Artiles did the right thing by resigning.

“I take no pleasure in these unfortunate events. But I urge that we learn from them,” Braynon said. “In our communities, our state, and our country, there should be a message of hope, of tolerance, of unity. We cannot afford the high cost words of divisiveness and cruelty leave in their wake.”

Artiles won his seat in November in a district that’s politically competitive.