Pensacola, FL – A Florida deputy is being accused of excessive force, and adding insult to injury by baking his victim a “sorry I tased you” cake. According to victim Stephanie Byron, deputy Michael Wohlers showed up at the building where she worked for no reason. He then began bullying her and other employees that were present.

The lawsuit states that the officer “used his apparent law enforcement authority to intimidate, harass, and threaten plaintiff … about her personal life. Because Wohlers did not like how Plaintiff failed to respond to his show of authority, Wohlers became increasingly aggressive toward employees at the apartment complex’s office, including with Ms. Byron.”

Ms. Byron says that the officer then took a Sweet Tea that was sitting on her desk and refused to give it back to her. When she attempted to get her drink back, the officer tased her in the throat and chest and then jumped on top of her when she fell to the ground, placing his knees firmly on her chest and forcefully removing the taser prongs.

The official statement from the police department and from deputy Wohlers report suggests that this was a simple occurrence of “horseplay.” However, Byron says that this issue was no joke and that there was no “play” on her part whatsoever. She was randomly bullied and attacked by a corrupt officer, who had no official business at the location where the incident occurred. 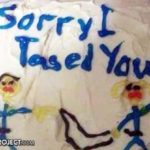 To add insult to injury, Wohlers later attempted to apologize to Byron by baking her a cake with the image of a police officer tasing a person, with the words “sorry I tased you.” Despite the complaints against him and the admission of guilt, Wohlers has received “qualified immunity” in the case, which means he has been shielded from legal penalties and lawsuits as a result of the incident because he happens to be a government agent.

According to Wohler’s attorneys, his actions “reflect, at worst, mere negligence,” and that the officer did not act in “bad faith, or with malicious purpose, or in a manner exhibiting wanton and willful disregard of human rights, safety or property.” As a result of this immunity, the Sheriff’s Department, and the taxpayers will foot the bill for any damages won in a lawsuit.
Wohler has since resigned from the department as he was being investigated for misconduct — a common move among cops who want to escape punishment.