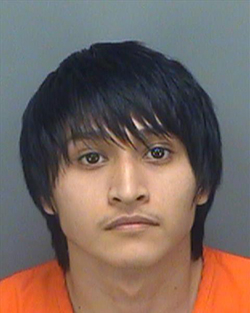 Around 2:30 in the morning at Thompson’s Dry Cleaners, a 24-hour laundromat in the Trampa Bay, someone called the cops to report a fapping Florida man.

Carlos is a Florida Native, born right here in the Funshine State.

He was “naked from the waist down” and “watching pornography on his phone”, according to the arrest affidavit.

After he was read his Miranda Rights, he told the cop that he masturbated in public in the past, and that it “helps with his anxiety.”

Carlos was charged with 1 count of Exposure of Sexual Organs and released on his own recognizance that same afternoon.

Maybe if the Laundry Mat had been taught how to “dress like a lady” it wouldn’t have been asking you be fapped all up in there. Really cannot blame the guy when the building dresses like that.

That laundry place is screaming “come in and fap” all over it..