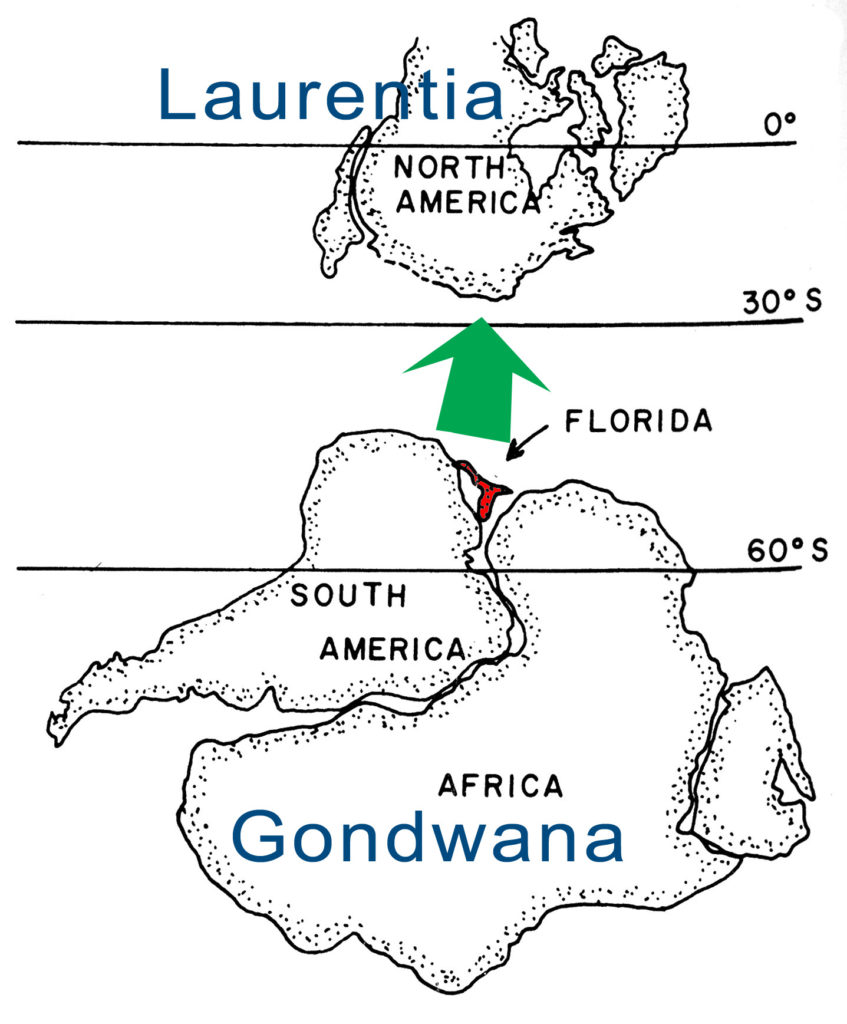 Would it surprise you to learn that some of the deep basement rocks underlying Florida were once part of Africa? Florida’s geologic history has been traced back to the early Paleozoic Era, 540 – 251 million years ago (mya), largely through the study of rock samples obtained from oil test wells drilled in northern Florida and nearby Georgia and Alabama. In Florida, the top of the Paleozoic strata ranges from approximately 3,000 to 8,000 feet below land surface and they consist of igneous and metamorphic rocks overlain by sandstones and shales.

The sedimentary basement strata were found to contain macrofossils such as trilobites, brachiopods, graptolites, mollusks and plant remains, as well as microfossils including conodonts, ostracods and palynomorphs (tiny organic-walled fossils from a variety of different organisms). Anomalies in the assemblages of fauna soon became apparent to early researchers. A fossil trilobite species discovered in a Madison County oil test well had previously only been known from Eastern Europe and North Africa. Like the trilobite, fossil faunas in other wells did not match those expected from North America, but rather more closely resembled fossils from Africa, South America and Europe. The palynomorph assemblages eventually became instrumental in correlating Florida basement rocks with those of Africa. Subsequent gravity, paleomagnetic and geochemical (isotope) studies helped confirm that Florida’s Paleozoic basement rocks comprise an exotic terrain most likely associated with northwestern Africa. In fact, recent study suggests that the exotic terrain may also include components of South America.

How did the African rocks get here? The oil well samples chronical the response in Florida’s rock record to global plate tectonic movement when the ancient landmasses of Laurentia and Gondwana converged to create the supercontinent of Pangea, about 300 mya. Gondwana was comprised, in part, of the joined land masses of Africa and South America. Laurentia was comprised of the future North America as well as other continental fragments. During this tectonic convergence a small block of crust from northwestern Africa, which has been named the Suwannee Terrain, moved with Gondwana and collided with Laurentia in a region that would one day become the southeastern portion of the North American continent. Later during the Jurassic Period, approximately 200 mya, the resulting supercontinent Pangea began to break apart, ultimately resulting in the formation of the world’s continents as we know them today. In the process, the Suwannee Terrain remained permanently sutured to North America and formed the foundation for the present day Florida Platform. Our African basement rock is today covered by thick sequences of younger strata, and no expression of it or its suture to North America is evident at the surface.

[…] she’s usually pretty close to Florida so it shouldn’t take too long for a response. Florida was once part of Africa, so all of their spirits can manifest here easily (hence all the loud drumming and enchanting dance […]