Umatilla (WTFF) – A Florida woman was arrested after reportedly biting her boyfriend during a dispute.

Sheriffs came out to the couple’s home on Chicago Ave. Saturday evening and met with the victim, Florida Man. He stated in the affidavit that he was “laying in bed” when his girlfriend of three years busted in and “made threats on his life.”

She reportedly jumped onto him and bit his right arm. Officers found a red bite mark on his bicep.

The 29-year-old Florida Woman told the cops, “yes I bit his arm, but out of self defense only.”

She reportedly said they were arguing about a Facebook account that was blocked. She said he “pulled her hair as well as grabbed her by the neck area.” There was no evidence of such a struggle.

Melissa Henderson was arrested and charged with Simple Battery Domestic. She bonded out the next day for 1,000 dollars, though she was held on No Bond for that one night. 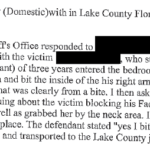 Dave and Chuck brought me here